Rotary and its partners have developed an endgame for the final eradication of polio, and the plan is working successfully. No one can predict the last case of wild poliovirus, but if our progress is sustained, it may come before the end of this Rotary year. What a victory that will be for Rotary and its partners – and for the children of the world!

Rotary also has a plan to publicize and gain recognition for its vital role in the eradication of polio. Rotary started its first immunization campaign against polio in 1979, when there were still 500,000 cases of paralytic polio every year. Its success led Rotary to launch PolioPlus in 1985, with the goal of immunizing all the world’s children against polio. It raised US$247 million for that purpose in the first three years, and it then joined forces with the World Health Organization, U.S. Centers for Disease Control and Prevention, and UNICEF in 1988 to eradicate polio. When the partnership was formed, a truly epic battle was joined, and Rotary was the catalyst. 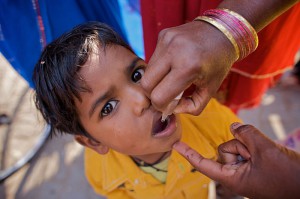 Now we are in the final days of this heroic effort, and it is important for Rotary that the entire world is made aware of its contributions as a major partner in the eradication battle. Rotary International and The Rotary Foundation will do everything they can to publicize Rotary’s role, but that is only one piece of the puzzle. Every Rotary club needs to learn the history of the PolioPlus campaign and publicize the news in their local communities. We need the active involvement of every Rotary club in the world to spread the news around the globe.

Download the marketing tools available at endpolio.org, and read Rotary and the Gift of a Polio-Free World, now available at shop.rotary.org. Share information about Rotary’s role in the fight to end this disease with your social networks online and offline.

World Polio Day is observed every year on 24 October, and it is critical that every Rotary club schedule an event on or around 24 October this year to spread the word in their local communities about Rotary’s role in the campaign to eradicate polio. Use the live-streamed updates from endpolio.org as a key element of the program. This is a great time to start our local publicity efforts for World Polio Day 2015. We are so close to our goal – don’t let us down! Your club needs to start spreading the outstanding news about PolioPlus!

John Borst’s career in education spans the years 1960 to 1996. During those 36 years, he spent an equal amount of time working int he English language, Public and Catholic school boards. Borst taught in both elementary and high school environments. Positions of responsibilities held included department head in Geography, curriculum coordinator of Social and Environmental Studies, Principal, Education Officer with the Ministry of Education, Superintendent of Schools, and Superintendent of Student Services. Borst retired in 1996 as Director of Education for the legacy Dryden Board of Education. During this time, Borst has lived in the Ontario communities of Brampton, Toronto, Newmarket, Thunder Bay, Aurora and Dryden. Currently, Borst splits his time between Dryden and Toronto. Since retirement, Borst has served as a Supervisory Officer with a remote School Authority; been a freelance writer of articles on education in particular for Education Today, the magazine of the Ontario Public School Boards’ Association (OPSBA); founded and edited from 2006 - 2010 the Education blog Tomorrow’s Trust: A Review of Catholic Education; and from 2003-2010 was a trustee of the Northwest Catholic District School Board.
View all posts by John Borst →
This entry was posted in Columnists and tagged End Polio Now. Bookmark the permalink.