March is literacy month. Of Rotary’s six areas of focus, I want to make the case that basic education and literacy should be our first priority.

These numbers are not shrinking; in fact, they are growing. They are growing so fast that governments in developing nations simply do not have the capacity to keep up with the problem.

Uneducated children and illiterate adults are found in two main geographical areas: remote rural villages and urban slums. Never in the history of humans has the magnitude of movement from rural agricultural communities to huge urban agglomerations been as great as it is at this moment in time.

This change and the magnitude of the problem of the lack of literary should be a concern to all Rotarians.

Rotary’s Future Vision asks us to focus on the six areas of Peace and conflict prevention/resolution, Disease prevention and treatment, Water and sanitation, Maternal and child health, Basic education and literacy, and Economic and community development. 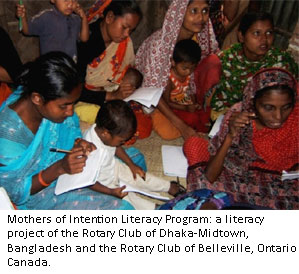 Only one, “Basic education and literacy” has the underlying ability to seriously impact the other five. Illiterate children are the most vulnerable and likely recruits for ideological extremists bent on change through violence. The likelihood of creating sustainable water and sanitation projects in areas of few literate people is so low as to be virtually unthinkable. Both disease prevention and treatment and maternal and child health increase with a literate population, while little improvement is possible in a local economy without a rudimentary understanding of numbers and money.

Yet when we see a list of Literacy projects we do not see the problem of basic literacy especially in urban slums being addressed by Rotarians.

We do however see hundreds, perhaps thousands of local projects from Rotarians reading to children at their neighborhood school to raising funds to build schools and train teachers in rural areas of developing countries.

District 5550’s signature project called the Ripple Effect Program is an excellent program to improve literacy in rural areas of Guatemala. Even there a rudimentary education program was in place. The school was a ramshackle structure but had teachers and with support from District 5550’s clubs and other partners it now has schools of bricks and mortar. Sanitation and clean filtered water followed the building of the school.

This month Rotary International has a web page describing 8 exemplary and laudable programs. (See a gallery of Rotary projects promoting basic education and literacy) Although most projects deal with the poor or in response to natural disaster something is missing, the working poor and the children of the World’s worse slums.

Let’s face it, it is much riskier and rarer for NGO’s to enter large urban slums. These are crowded, noisy, less trusting and more chaotic than anything found in rural areas. Yet they are also where the problem of illiteracy among both adults and children is more widespread and most urgent.

Although I know there are Rotarians who passionately support each of the other Areas of Focus, it is my wish that after Polio, literacy or to put it the other way, ridding the world of illiteracy, become our primary focus.

So if our focus is “basic” education and literacy what are we doing supporting literacy in wealthy countries. I have no intention of belittling our efforts in our own well developed economies however, when it comes to making the world a better and a safer place for everyone then tough choices have to be made.

In 1985 we chose among a number of world wide scourges to eradicate the Polio virus. That is the kind of choice we are faced with or among our six areas of focus.  Clean water advocates appear at this point to have the strongest lobby group within Rotary among the six initiatives but my point is, that is not the one on which we should put our greatest focus..

It may be many years yet before Polio no longer exists as a killer and maimer of children and adults. The issue of achieving a fully literate world is equally urgent if we are to survive as a spices into the next Century let alone Millennium. It is time we as Rotarians recognized this emerging reality and really addressed the problem of illiteracy in urban slums head on.

John Borst’s career in education spans the years 1960 to 1996. During those 36 years, he spent an equal amount of time working int he English language, Public and Catholic school boards. Borst taught in both elementary and high school environments. Positions of responsibilities held included department head in Geography, curriculum coordinator of Social and Environmental Studies, Principal, Education Officer with the Ministry of Education, Superintendent of Schools, and Superintendent of Student Services. Borst retired in 1996 as Director of Education for the legacy Dryden Board of Education. During this time, Borst has lived in the Ontario communities of Brampton, Toronto, Newmarket, Thunder Bay, Aurora and Dryden. Currently, Borst splits his time between Dryden and Toronto. Since retirement, Borst has served as a Supervisory Officer with a remote School Authority; been a freelance writer of articles on education in particular for Education Today, the magazine of the Ontario Public School Boards’ Association (OPSBA); founded and edited from 2006 - 2010 the Education blog Tomorrow’s Trust: A Review of Catholic Education; and from 2003-2010 was a trustee of the Northwest Catholic District School Board.
View all posts by John Borst →
This entry was posted in Editorials. Bookmark the permalink.